"Secret Voyage", the latest album from BLACKMORE'S NIGHT — the award-winning band fronted by singer/songwriter/multi-instrumentalist Candice Night with legendary lead guitarist Ritchie Blackmore — has remained No. 1 on the Billboard New Age chart for the fourth straight week.

The CD recently entered the German Media Control chart at position No. 14 and Finnish chart at No. 38."Locked Within The Crystal Ball", the new video from BLACKMORE'S NIGHT, can be viewed below.Other members of the band include Bard David of Larchmont (keyboards/vocals), Earl Grey of Chimay (bass/rhythm guitar/vocals), Squire Malcolm of Lumley (percussionist), and Gypsy Rose (violin/vocals).

This kaleidoscopic musical journey through time and space incorporates traditional folk music from around the world. The album blends haunting ancient melodies with newly written Night lyrics inspired by nature and fantasy, partially recorded on renaissance-period instruments, and arranged with a contemporary dramatic flair that features the brilliant acoustic and electric guitar stylings of Blackmore. This CD is sure to transport you to a simpler, more magical time, away from the stresses of modern day life."With BLACKMORE'S NIGHT," says Blackmore, "we have the creative freedom to play any style of music we want. We can play folk, rock, ballads, instrumentals, or tavern songs. I couldn't do that in DEEP PURPLE. Now I feel as if I'm not in a box anymore."

Inspired by their international performances, and assimilating the various melodies from the continents they've traversed, many of the 12 new tracks on "Secret Voyage" have been adapted from the folk traditions of numerous countries including France ("Gilded Cage"), Russia ("Toast To Tomorrow"), Germany ("Prince Waldeck's Galliard") and England ("Peasant's Promise"). Add to that two stunning covers done distinctively in BLACKMORE'S NIGHT's strongly identifiable style — the 1961 ELVIS PRESLEY hit "Can't Help Falling In Love" and RAINBOW's "Rainbow Eyes" — and some entrancingly poignant originals.

Posted by GlobalProgressive Rock Network at 10:50 PM No comments: 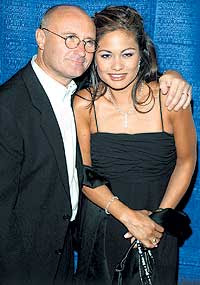 Phil Collins has handed over £25million to his third wife in the biggest-ever divorce payout by a British showbiz star.
The massive settlement beats the £24.3million Paul McCartney recently handed over to Heather Mills and puts the £12.5million which Chris Tarrant settled on ex-wife Ingrid in the shade. Genesis singer Phil, 57, has given the huge cash sum to Swiss beauty Orianne Cevey, 35, after just six years of marriage and two children.
And it is not the first time Phil has had to give away large chunks of his cash.
In 1994 he gave his second wife Jill Tavelman £17million after famously dumping her by fax.
It means he has now paid out more than £42million almost a third of his £140million fortune.
A music industry source said: "Marriage has certainly not come cheap for Phil. He has now made two of the biggest divorce payments in showbiz history.
"At least no one can accuse him of leaving his ex-wives short. When you compare what he's paid out relative to his own fortune the figures are enormous."
Orianne even got a much bigger percentage of Phil's fortune than Heather Mills got from Macca. The divorce payout came to light in the latest accounts for Phil's personal management company, Philip Collins Ltd.
He met Orianne on tour when she was just 22 and he was still married to Jill. They set up home in Geneva and were together for five years before their lavish three-day wedding in Lausanne with 300 guests including Elton John and Eric Clapton.
The couple bought racing driver Jackie Stewart's old house in Bugnins, near Geneva for an estimated £20million but announced they were parting in 2006.
Orianne has remained in the mansion while Phil moved into another home nearby so he could remain close to sons Nicolas, eight, and Matthew, four.
He now divides his time between Switzerland, New York and a holiday home in Dersingham, Norfolk.
Orianne has recently set up a luxury jewellery business based in Switzerland called The Right Label.
Phil who was the drummer in Genesis until he stepped up to replace original singer Peter Gabriel has since been linked to American newsreader Dana Tyler, 49, who he met during an interview.
He has two children with his first wife actress Andrea Bertorelli, Joely, 33 and Simon, 28. That relationship ended when she ran off with their decorator.
Collins famously appeared on Top Of The Pops singing his 1981 solo hit In The Air Tonight with a pot of paint and paintbrush perched on his piano as a bitter coded message to his wife.
It is not known how much his divorce settlement was that time but is not thought to match the huge sums he has paid out since.
Phil has recently suffered hearing loss due to an ear infection and earlier this year he announced he was giving up touring for good.
sean.hamilton@sundaymirror.co.uk
By Shawn Hamilton
http://www.mirror.co.uk/
Posted by GlobalProgressive Rock Network at 12:52 AM No comments: