Canadian rock legends RUSH will bring their revered three-and-a-half-hour "Time Machine" tour to the U.K. — with shows in Glasgow, Sheffield, Manchester, Newcastle, Birmingham and London — this coming May 2011.

The "Time Machine" tour is an evening with RUSH, where they will perform their classics, give a taste of the future and will — for the first time ever in the U.K. — feature the "Moving Pictures" album live in its entirety.

The North American leg of the tour kicked off in June of 2010 and led to RUSH ranking #1 on Billboard's "Hot Tours" chart, followed by a return to Brazil and first-time shows in Argentina & Chile on their South American tour this past fall, all the while rabid demand warranted extending the tour to Europe.

"'Moving Pictures' is our most popular album and it's the one that seems to have passed the test of time most gracefully," observes singer/bassist Geddy Lee. "We're playing better than ever, and I'm not sure we're quite ready to put that tour away," he adds.

Tickets go on sale on Friday, November 26 at 9:00 a.m. GMT.
Posted by GlobalProgressive Rock Network at 2:23 PM No comments:

Email ThisBlogThis!Share to TwitterShare to FacebookShare to Pinterest
Labels: Rush

"I have been working on a few new things of late. I finished the album with Gary Hughes and the band TEN. Dennis Ward will be mixing and it will be out on Frontiers Records soon. Great record and I can't wait to hear the final version. Really enjoyed myself and challenged myself on this as it is a strong commercial rock album, but I also added my personality to it. This will really be something. Very proud of my work on this. I have also decided to give drum lessons via Skype. I will be able to reach students worldwide and trying to use technology to its fullest. I will be taking a stereo feed from my recording console so my drum sound should be album quality. I am planning both an ongoing course of study program or a single lesson, much like a master class.

"A students input and desired instructional direction is crucial. I want to teach what the student wants to learn, not just what I want. More details in the next couple weeks. I can be reached at mark@markzonder.com for inquires.

"Last but not least, I have put together a full-out prog-metal band. Yes, I said prog… Time to get back to this world, time to go home. At present we are putting together songs. Sort of like playing a drum solo from start to finish. A lot of playing but also great vocals and big hooks. Sort of fun not worrying about having the vocals start 20 seconds in. More to come shortly."

Posted by GlobalProgressive Rock Network at 2:36 PM No comments: 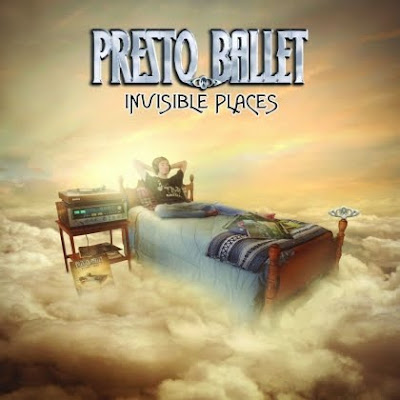 PRESTO BALLET, the project led by ex-METAL CHURCH guitarist Kurdt Vanderhoof, will release its new album, "Invisible Places", on February 4, 2011 via SAOL / H'Art / Zebralution. The cover artwork for the CD can be viewed below.

PRESTO BALLET released its second LP, "The Lost Art of Time Travel", in 2008 in the U.S. through ProgRock Records.

PRESTO BALLET's music was previously described as "highly reminiscent of '70s prog rock, as the band was founded chiefly as a tribute to classic progressive bands such as YES and KANSAS. Their debut album, 'Peace Among the Ruins', was released in 2005 to general praise and considerable press. Critics consistently commented on the album's warm and organic sound, a feeling created through the use of analog recorders and vintage instruments, played with great skill and precision. The band used no drum machines, digital recorders or sequencers in the studio."

Posted by GlobalProgressive Rock Network at 2:27 PM No comments:

Occasionally a musician has to take a step back into the past to develop artistically. Tom Englund, guitarist and vocalist with EVERGREY, took this risk and reorganized his artistic environment. "The most recent EVERGREY lineup had reached a point where we no longer had fun as a group," he confesses, adding: "So we went our separate ways to save our friendship. There were no angry words, and we're still friends privately."

Naturally, the decision to break up wasn't easy for these long-standing friends, especially for Englund and his remaining keyboardist, Rikard Zander, for whom a continuation of EVERGREY was never called into question. Yet they both had to face a new challenge. In the beginning, we weren't sure whether we'd be able to write a new album without the wealth of experience that the previous lineup brought in," Englund says. "But after Rikard and I had composed a full three numbers during the first week, we felt that was a real coup."

Listeners will feel this positive energy throughout "Glorious Collision", which is described as "a dynamic goody bag featuring the most diverse material ever released on an EVERGREY album." "This may sound like a contradiction in view of our personnel situation, but Rikard and I have allowed more influences on 'Glorious Collision' than ever before," Englund says. "Some elements on 'Glorious Collision' are classic rock, based on a metal format, sometimes the tracks are quiet and haunting, sometimes wild, demanding and gripping."

This diversity is also expressed in the instrumentation of this extremely dynamic studio production which presents the new band members Marcus Jidell (guitar), Hannes Van Dahl (drums) and Johan Niemann (bass). "It's great to hear what a breath of fresh air Marcus, Johan and Hannes have brought into the band," Englund enthuses. "Although the entire material, except for two songs to which Marcus contributed on the compositional side, had already been decided when we started recording, they all left their own, very personal mark on this album." The great experience of Jidell and Niemann, who have worked with acts such as ROYAL HUNT and THERION, among others, and have now contributed lots of positive energy together with the 20-year-old drummer Van Dahl, can be felt throughout the album.

Posted by GlobalProgressive Rock Network at 2:25 PM No comments: