The Tangent To Join Forces with Beardfish

The Tangent is undergoing a large change. After four studio albums plus 2 live CDs and a DVD, the group is about to take a new step forward.Andy Tillison will remain at the band's helm, along with founder member Guy Manning, Theo Travis and the more recently recruited Jakko M Jakszyk. However, the association with the Malmo based trio of Jonas Reingold, Jaime Salazar and Krister Jonsson is now over and The Tangent will return in effect to its more project based rooting. The replacement musicians are well known to many of you and are the whole of the young and enthusiastic quartet "Beardfish" from Sweden.
The new project band will make its live debut at The Summer's End Festival in the UK on the 28th September. Plans are afoot for the commencement of recording of the next Tangent album, which it is hoped will use the lineup to maximum effect.
And here's a link to a more in depth explenation from Andy Tillison: http://thetangent.org/
Posted by GlobalProgressive Rock Network at 12:24 AM No comments:

Email ThisBlogThis!Share to TwitterShare to FacebookShare to Pinterest
Labels: Beardfish, The Tangent

CONTROLLED BLEEDING, one of the earliest American acts to pioneer industrial music, is celebrating its 30 year anniversary with a free download of “Wall of China Love Letters,” the second track on BEFORE THE QUIET, just released by MVD Audio. Oddly, although the song was recorded in 1978, the abrasive, bouncing, instrumental could be a musical blueprint for the bands coming out of Williamsburg’s disco punk scene.
Although CONTROLLED BLEEDING has been and always will be lumped into the genre of old school industrial music, their earliest inspirations were steeped in the first wave of New York City punk bands like The Dictators, Dead Boys, the Ramones and the brooding technical brilliance of King Crimson, Mahavishnu Orchestra and Henry Cow. BEFORE THE QUIET, a collection of music from the early formations of the group, infused with the hunger and intensity of youth, clearly illustrates the collision of these seemingly opposing influences. Recordings from 1978-1982, assembled by main man Paul Lemos capture the different early eras of CONTROLLED BLEEDING. BEFORE THE QUIET is an incredible peek back into the early days of "anything goes" alternative music.
Other CONTROLLED BLEEDING side projects include THE BREASTFED YAK (www.breastfedyak.com), SKIN CHAMBER (www.skinchamber.com) and FAT HACKER (www.fathacker.com).

Posted by GlobalProgressive Rock Network at 12:33 AM No comments:

Tunisian band MYRATH and the British 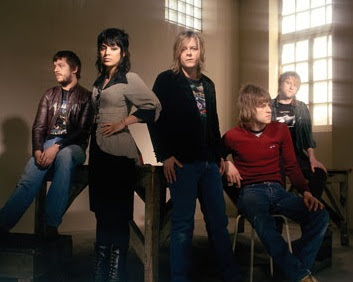 newcomers PURE REASON REVOLUTION have been confirmed for the tenth-anniversary edition of the ProgPower Europe festival, set to take place October 3-5 at JC Sjiwa in Baarlo, The Netherlands. In other news, the Swedish band WOLVERINE will perform two concerts at ProgPower Europe. Because they opened the first edition of the festival back in 1999, WOLVERINE will play the same set on Friday, October 3 as they did nine years ago. On Sunday, October 5 they will put on a regular show featuring some of the group's more recent material. Other bands scheduled to appear at the ProgPower Europe festival are THRESHOLD, CYNIC, PAGAN'S MIND, WOLVERINE, GHOST BRIGADE, DIVISION BY ZERO, SUSPYRE and ZERO HOUR.
Posted by GlobalProgressive Rock Network at 7:18 PM No comments: