Trevor Horn, who has been made a CBE in the New Year Honours, is one of the most influential record producers of the last 30 years.

During his career his epic pop treatment has graced hits by Frankie Goes to Hollywood, the Pet Shop Boys, Grace Jones, Seal and Robbie Williams.

A classically trained musician, Horn began as a session musician and in the house band at the Hammersmith Palais nightclub in London.

It was this apprenticeship, he claims, that taught him "the dynamics of the dance floor".

His big break came when he donned a pair of giant spectacles, formed The Buggles and wrote the the hit that was to make his name.

The duo's Video Killed the Radio Star reached number one in 16 countries. Two years on, it achieved immortality as the first track played on MTV.

Horn then briefly fronted progressive rock band Yes, though he received dire reviews as its bassist and lead singer.

Moving behind the mixing desk, Horn made his name as a producer with girl-boy duo Dollar.

He then moved on to mastermind The Lexicon of Love, ABC's masterpiece of 1980s pop.

Horn's ability to combine emerging synthesiser and sampling technology with rhythm and drama gave even the cheesiest tunes a sense of adventure and futuristic allure.


Frankie Goes to Hollywood sold 3.5 million singles in the UK in 1983 and 1984 There was also an unlikely collaboration with punk maestro Malcolm McLaren on the Duck Rock album, not to mention work with innovative electronic group The Art of Noise.

The producer returned to Yes in 1983 for the album 90125, single-handedly reinventing the ageing rockers with chart-topping anthem Owner of a Lonely Heart.

In the same year he signed Liverpudlian group Frankie Goes to Hollywood to his new label, ZTT.

Horn used drum machines and sampling to create the symphonic dance tracks Relax, which topped the charts in January 1984, and Two Tribes, which stayed at number one for nine weeks that summer.

Over the last decade, the sweeping hits have continued - with Russian duo Tatu, X-Factor runners-up G4 and Robbie Williams on Reality Killed the Video Star, an album named in honour of the producer's breakthrough hit.


Horn (left) played in Robbie Williams' band at the BBC Electric Proms in 2009 His eclectic outlook has also seen him lend his polish to such indie acts as Belle & Sebastian, Kid Harpoon, Captain and Delays.

Most recently he produced Robbie Williams and Gary Barlow's duet Shame - recorded, along with part of Take That's reunion album Progress, at his Sarm West studios in west London.

He was also at the controls for guitar legend Jeff Beck's album Emotion and Commotion, up for seven Grammy awards in February.

Horn received a standing ovation from his peers in the music industry when he was bestowed with an outstanding contribution honour at the Ivor Novello songwriting awards in London last May.

A few months later, the Buggles reformed for a one-off gig to raise money for the Royal Hospital for Neuro-disability in London.

It was, he said, "a very special cause, one that's close to my heart".

His words hinted at a family tragedy five years ago when his wife and business partner Jill Sinclair was accidentally shot in the neck with an air rifle by their son, leaving her in a coma.

"You soon discover that the things money brings aren't important," he told a newspaper last year.

Posted by GlobalProgressive Rock Network at 2:22 AM No comments:


Multinational melodic metal band EDEN'S CURSE will return with its latest and third studio CD, "Trinity", on March 18 via AFM Records. The band has been working daily on this release, fine-tuning every last detail over the last twelve months.

EDEN'S CURSE has announced that leading the infamous Curse Choir this time around is none other than DREAM THEATER vocalist James LaBrie. LaBrie lends his backing vocals to the entire album and also duets with EDEN'S CURSE frontman Michael Eden on the slamming epic "No Holy Man", which is also set to be released by AFM Records as a digital single on February 25. A promotional video is currently in production as well.

Michael Eden says: "James recorded the 'Trinity' sessions at Iguana Studios in Ontario straight after he finished his solo release, 'Static Impulse', which was perfect timing as he headed off on tour with IRON MAIDEN immediately after. "

James LaBrie himself adds: "In 2010 I was fortunate to discover EDEN'S CURSE. I absolutely love this band. Great players and people and they deserve nothing but huge success. They belong with the best of today's music. Trust me, you're going to love this from beginning to end."

Bass player and main songwriter Paul Logue explains: "James was highly professional, as you'd expect, extremely approachable and very enthusiastic about our music. We sealed the deal very quickly and we got him in top form as he was also in the middle of recording and we feel the end results are breathtaking."

Michael Eden further adds: "'Trinity' has been a long time in the making as we always strive to bring our current fan base and new fans our very best. I spoke with James LaBrie backstage on the IRON MAIDEN tour last summer and we had a great conversation. James has a way of making you see things in a different light than other people. It was an honor to have him along for the ride and we hope that it is not the last time we work together."

Eden then goes on to add, "We still have more cool surprises we will announce soon, this party is just getting started."
Posted by GlobalProgressive Rock Network at 2:11 AM No comments: 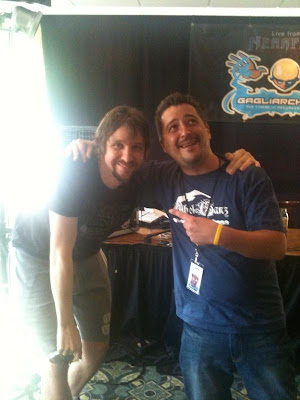 German native Minnemann — who currently resides in San Diego, California — is looked upon by his peers as one of the most gifted, innovative, cutting-edge drummers on the international music scene today. He has won numerous awards for his educational drum books and videos and was featured on the cover of the world's leading drum magazine, Modern Drummer. Minnemann's unusual drum kit setup, which includes an array of multiple foot pedals, gong drum, electronics and unique cymbal configurations, combined with his amazing, extreme interdependence skills has propelled him to superstar status among today's elite drumming royalty. His total command of four-way independence is unequaled, and his over-the-top drumming creations are simply mind-boggling.

Posted by GlobalProgressive Rock Network at 1:44 AM No comments:

According to Classic Rock magazine, legendary guitarist Uli Jon Roth is the latest artist to be confirmed for the "ITV Legends" series of intimate shows. He will appear on Saturday, February 26, playing a set that will span his career, including songs from the SCORPIONS, ELECTRIC SUN and his own solo material.

The performance will take place at Metropolis Studios in West London, England, and there are just 125 tickets available.

Not only will you get to see Uli play, but also have a champagne reception, a meet-and-greet with the man and also have your name on the DVD and credit roll of the TV show.

To get tickets, go to www.metropolis-events.co.uk.
Posted by GlobalProgressive Rock Network at 1:39 AM No comments:

Mick Karn Passes Away At Age 52

From The Toronto Sun:
Japan bassist Mick Karn has lost his battle with cancer at his home in London. He was 52.

Karn, real name Andonis Michaelides, announced he had been diagnosed with the disease at the beginning of June, telling fans on his website that the security and well-being of his wife and young son are now his top priority.

A statement posted on his website on Tuesday confirmed Karn "was surrounded by his family and friends" at the time of his death.

Born in Cyprus, Karn was a big part of the U.K.'s new wave movement in the early 1980s. As well as becoming a member of Japan, he also worked with Gary Numan and Kate Bush and founded Dalis Car in the mid-1980s with Bauhaus frontman Peter Murphy.

He moved back to London from his native Cyprus last year following the diagnosis he was terminally ill and fans launched several appeals via his website Mickkarn.net to help cover medical costs and offer financial support to his family.

Live Aid hero and Ultravox frontman Midge Ure was in the throes of hosting a charity concert in support of Karn when the bassist died.

Ure told the BBC last year, "When it comes to a situation like Mick's - who is in dire straits - he needs help, financial help and emotional help. I have had a lot of contact from people I haven't spoken to in a long time; we are looking at availabilities for various venues. It's a long, slow process, so we need to nail the venue and date.

"You are going to have most of Japan there doing stuff, certainly Steve (Jansen) and Richard (Barbieri) will be there, and people that Mick has worked with over the years. He has huge respect. He is one of the good guys; that's what's shocking to everybody. I think the interest in this will be huge.

"I think Mick's influenced everybody. Until I heard Japan, I had never heard a bass guitar played like that; it was almost like playing a lead instrument, incredibly percussive and melodic, something that inspired me."

In a statement released on Tuesday, Duran Duran bassist John Taylor called Karn, "one of the great visual and sound stylists of the late 70s/early 80s".
Posted by GlobalProgressive Rock Network at 12:05 AM No comments:


Progressive metal giants DREAM THEATER have officially entered the studio to begin work on their first album without drummer and founding member Mike Portnoy. The band's guitarist, John Petrucci, writes on his Twitter profile, "First day in studio [and] the dawn of a new era for DREAM THEATER. Can't wait to get the music flowing."

DREAM THEATER has yet to announce a replacement for Portnoy, who left the band last September. Petrucci recently stated about the group's drummer search, "Auditions went great and we do have someone but we are spending some time getting everything in order before making an official announcement. Let me just say that we are all incredibly excited about our choice and just bursting at the seams to let the world know!"

Just days after it was announced that he'd been dismissed as the touring drummer for AVENGED SEVENFOLD, Portnoy revealed that he tried to rejoin DREAM THEATER, and was rebuffed.

Portnoy, who co-founded DREAM THEATER more than 20 years ago, abruptly quit the band this summer while on tour with AVENGED SEVENFOLD.

He played on AVENGED SEVENFOLD's latest album, "Nightmare", following the death of that band's drummer, Jimmy "The Rev" Sullivan, and has toured with them since early summer.
Source: RNR
Posted by GlobalProgressive Rock Network at 2:14 AM No comments: